The Virgin Who Bewitched Lord Lymington 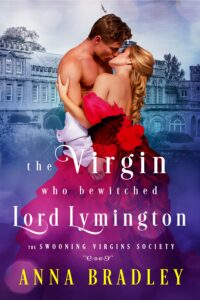 In the heart of Mayfair lies the Clifford Charity School for Wayward Girls, where a secret society of extraordinary young women conspire to bring England’s wickedest aristocrats to justice . . .

In London’s brothels and bawdy houses, sin and scandal run rampant. Yet as Emma Downing knows, far worse perils often lurk within the lavish homes of high society. Emma has been tasked with uncovering secrets at the Lymington family’s country estate—the scene of a rash of mysterious disappearances. Samuel Fitzroy, Marquess of Lymington, is no easy mark, and Emma fears he may see through both her disguise and her feigned indifference to his seductive charm . . .

Recently returned to England after a long absence, Samuel finds his family in chaos amid disquieting rumors floating about town. His young cousin has become a worthless rake, several housemaids have gone missing, and then there is Emma, who is clearly not the naïve debutante she pretends to be. Yet irresistibly attracted despite his mistrust, he joins her in a daring game of cat and mouse. For Emma will unearth the truth even if it brings ruin to Samuel’s family—but the threat is as inescapable as their mutual desire.